Joe Bouchard's band the "X Brothers" has a new AWESOME CD out !!

Get the new Brain Surgeons CD - DENIAL OF DEATH -

April DualDisc Releases From 5.1 Entertainment: "Extras on the DVD side of the DualDisc include band photos and live performance video for ?Cities On Flame,? and the album in DVD-Audio and Dolby Digital surround sound. "
- posted by Ken @ 10:26 PM 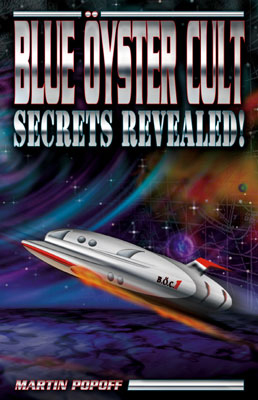 Blue Oyster Cult: 35 years in the biz, six gold and platinum U.S. albums,
classic trax like (Don't Fear) The Reaper, Godzilla, Burnin' For You,
Astronomy and E.T.I. Indeed, Donald "Buck Dharma" Roeser, Eric Bloom, Allen
Lanier, Albert Bouchard and Joe Bouchard comprised one of the great stadium
acts of the '70s and '80s. BOC were heavy metal enough to duke it out with
Kiss, Rush, Aerosmith, Ted Nugent and Black Sabbath, yet smart, funny,
ironic and jaded enough to please the tough New York critics, of which more
than a couple mingled within their ranks.

Martin Popoff: has written seven books on heavy metal and one on southern
rock. He is the Senior Editor of Brave Words & Bloody Knuckles, and also
contributes to Guitar World, Lollipop, Goldmine, Record Collector, Classic
Rock, Chart, Brazil's Roadie Crew, bravewords.com, chartattack.com and
hardradio.com. Born and raised in Trail, British Columbia, Martin went on to
complete an MBA, work for Xerox, then co-own a graphic design and print
brokering firm, before becoming a full-time rock critic in 1998, part time
since 1994. He currently resides in Toronto.

Blue Oyster Cult: Secrets Revealed!: This 200-page book is not a biography
as such, but a biography of the band's albums, a canon of work Martin calls
one of the finest in rock, and truly superlative on the lyrical front.
Indeed, Martin, in radio, print and TV interviews, has consistently called
the band's lyrics the best in the business, tied with those of Captain
Beefheart and Pye Dubois (Max Webster, Kim Mitchell).

The book examines the complicated early days of the band, graphically
demonstrating the show biz sweat that goes into making an act an act. The
majority of the book however is centred around the peerless intellectual
quality of the songs, a quality made entertaining by the band's psychotropic
and ghoulish humor, and by its interest in all manner of conspiracy
theories, cults, monsters, vampires, UFO tales, foul play, arcane
spiritualism, alchemy, love lost and love buried, science fiction and
science friction.

Along the way, Martin talks (in some cases numerous times) with Buck, Eric,
Albert and Joe, along with new drummer Bobby Rondinelli, legendary producer
of the band Murray Krugman and BOC expert Bolle Gregmar. For insight into
the band's fantastic lyrical world, Martin went right to the source, the
penners of BOC classics. Some of the best insights into creativity Martin's
ever heard - through 900 interviews as metal's most widely recognized
journalist - came from Sandy Pearlman (also the band's manager during the
golden years), Richard Meltzer, Helen Wheels, David Roter and John Shirley,
along with cover artists Greg Scott and Ioannis. Helen Wheels and David
Roter are since deceased; Martin's chats with them are among their last
interviews.

The result is a "biography" pointedly about what matters the most - the
recorded documents, the works, the masterwerks. Indeed, each chapter bears
the title of a BOC record, because that's what you get in the chapter -
detailed, track by track analysis about the music and the lyrics (not to
mention some of the personal stuff swirling around the sessions).

Blue Oyster Cult: Secrets Revealed! zestfully fulfills the mandate set out
by Martin at the onset, a mandate that Martin has always felt to be the mark
of a good rock bio - it sends you scampering back to your CDs and LPs for a
second and third and fourth, very detailed, listen, one that results in new
appreciation for the genius of the artist examined. 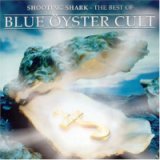 Back to Flaming Telepaths Home